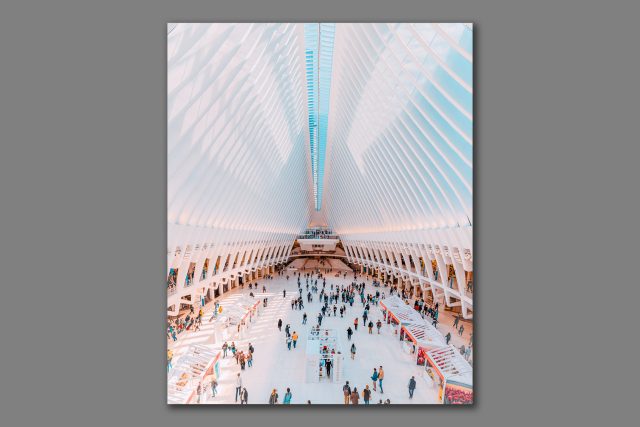 This is a picture of the Oculus in New York City. The Oculus is a train station and shopping mall located near where the World Trade Center towers once stood.

The shot was challenging for two reasons — One reason was the light. It was considerably brighter on the left than on the right and it was dappled. I had to guard against hotspots ruining the shot. The other reason was the structure of the building itself. There are so many lines and I wanted to capture them faithfully with minimal distortion — if I went with too wide angle of a lens, everything would have been bent. Because of that, I chose to shoot at 24mm and shoot a vertical panorama to capture the entire building interior.

I shot the image horizontally and I took the first image at the bottom. I moved my camera up so that roughly 1/3 of the image would overlap and took the second image. I took two more images, moving my camera up each time so at the end, I had four shots of the oculus, each framed from the bottom to the top, and each overlapping the last by about a 1/3.

I stitched the panorama in Lightroom and did all of my adjustments in Lightroom. Nothing out of the ordinary except, because the left side of the image was so much brighter than the right, I wanted to make sure that I balanced the exposure as much as possible. I brought Highlights & Whites down quite a bit and opened up the Shadows & Blacks considerably to make it more balanced. I played up the cool on the right side beams and sky against the warm sunlight on the left by bringing up the saturation of the yellow and blue in the HSL tab. That was pretty much everything I did.

Nikon D850 with Nikon 24-70mm F2.8 Lens – Handheld
Aperture Priority Mode
Spot Metering – I actually metered on my hand. Too bright in there to meter anywhere else*⠀
Single Point Focus – Focused on the middle of the kiosk at the bottom middle**⠀
Kept same focus point and exposure for all four shots.
1/250, F8.0, iso: 720 at 24mm

*I have a function button on my camera programmed for AE Lock. Pressing it locks exposure until I press it again to turn it off.

**Since I use back-button focus, when I press the shutter button in, my camera will not try to focus at all. So, I was able to focus, as I indicated, on the kiosk using the back button then, each time I pressed the shutter for the four exposures, my camera didn’t try to grab focus again.

Look for a new How I Got The Shot every week or so! 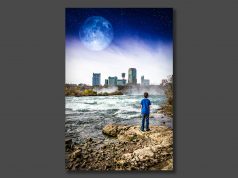 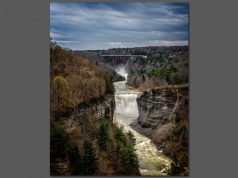 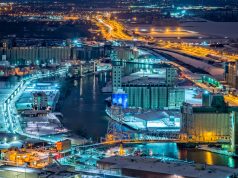 Use Radial Filters to Make Your Images POP! (Lightroom Tutorial) 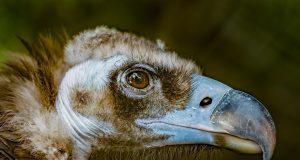